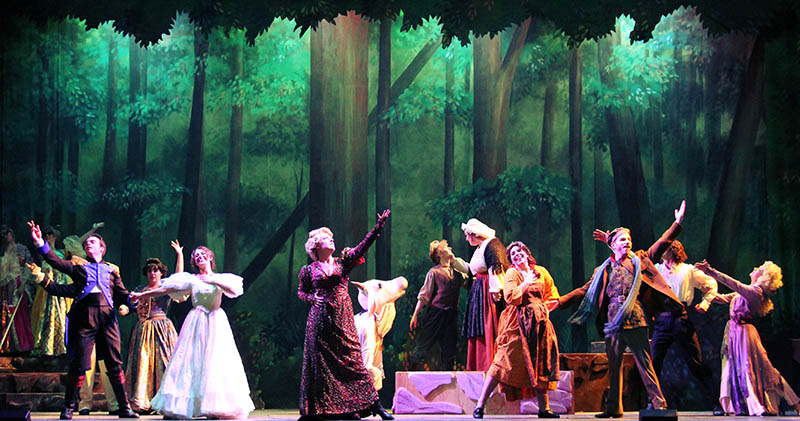 WSU theater students perform in the musical “Into the Woods.”

Charles and Dolores Crum worked hard their entire lives, he as an accountant with KG&E utility company, she as an executive with Girl Scouts of Kansas Heartland. In their free time, they played just as hard, pursuing passions such as watching live theater, playing tennis and attending basketball games.

“They would go to New York for the U.S. Open and take advantage of the location to see several shows,” said Bob Collins, Dolores’ brother. “Or they would go to the Canadian Open and then see shows in Montreal.”

Their love of the theater prompted the Crums to make a generous estate gift to Wichita State, bequeathing $632,000 to endow a scholarship for students in the College of Fine Arts’ theater programs.

“They wanted to leave something that represented a part of their lives,” said Barney Collins, another of Dolores’ brothers.

Charles Crum began his studies at Wichita University in 1942, playing one year on the men’s basketball team before serving in World War II as a meteorologist. He returned to WU after the war, getting a bachelor’s degree in 1948. He then earned an MBA at the University of Texas. He was a natural athlete, playing tennis and handball competitively for many years. Charles died in 2018.

The Crums were longtime season-ticket holders for men’s basketball. They attended the NCAA Final Four tournament almost every year, even when they couldn’t secure tickets. “They wanted to be there for the atmosphere, and then they would attend shows in whatever city they were in,” said Bob Collins.

They frequently attended theater productions at Wichita State and performances around Wichita. “If there was any opportunity at all to see a show, they would be there,” Barney Collins said with a laugh.

“Their passion for the theater resulted in a contribution that will touch the lives of WSU’s performing arts students for many, many years,” she said. “We are deeply grateful and indebted to Dolores and Charles Crum.”