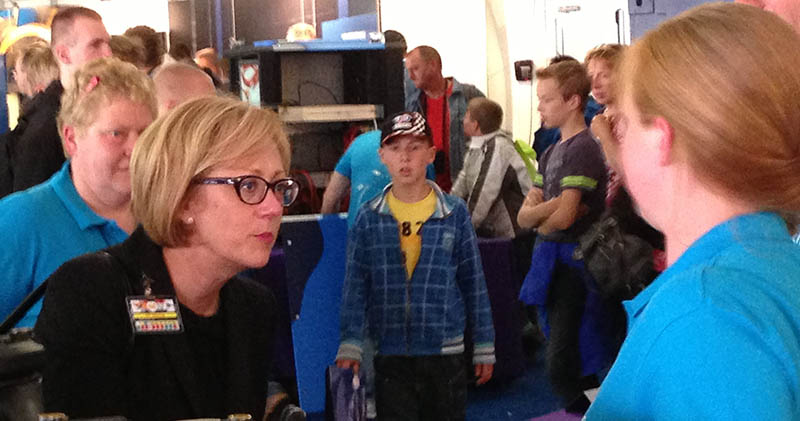 Saying she wants to help build a new generation of business leaders with a world view, Wichita State alumna Peri Widener has pledged $275,000 to her alma mater through the WSU Foundation. A portion of the gift will launch a program to help develop students into global business leaders.

In addition to initiating the Widener Global Leaders Program, the gift from Widener and her mother, Luanne, includes a pledge of $175,000 to the campaign to build Woolsey Hall, the new home for the W. Frank Barton School of Business. She said the gift celebrates the leadership of Larisa Genin, dean of the Barton School, and her vision for the school.

Widener graduated from Wichita State with a bachelor’s degree in journalism and a minor in business. Her education served as a springboard to a nearly 40-year career with Boeing. She held successively more responsible positions spanning communications, business development, site leadership and, ultimately, a role as vice president/general manager leading profit and loss businesses around the world.

“Throughout my career, I saw that a unique combination of education and experiences opened doors for growth in the organization,” Widener said. “I believe such a multidisciplinary background – liberal arts and business schooling combined with acquired business skills and seasoned with a fine arts background – can be a fundamental differentiator in making graduates successful in today’s complex world.”

That is why the Widener Global Leaders Program will emphasize a multidisciplinary education, with three WSU Colleges participating: the Barton School, the College of Fine Arts and Fairmount College of Liberal Arts and Sciences. Eight students a year from diverse backgrounds will be selected for the program. They will participate in activities designed to develop leadership, global acuity, business skills and cultural competence.

Widener said she is supporting the campaign to build a new home for the Barton School because she believes an inspiring environment is linked to the learning experience. In recognition of her support, she received naming opportunities for two spaces in the new complex. A collaboration area in the building’s atrium will bear the names of her grandmother, Juanita Cadwallader Harris, her mother, Luanne Harris Widener, and herself.

A second naming opportunity, for an entry plaza on the building’s west side, will be called Peri’s Place. “I see it as a place of inspiration and reflection. This special space could be used for lectures, readings, small performances and other activities that benefit their studies through these creative experiences.”

In making the gift, it was important to Widener to highlight the ways her grandmother and parents influenced her own life. Her grandmother, a teacher, began college in 1917 at a time when women often weren’t encouraged to pursue higher education. Her father, Wayne, pursued a business degree at Wichita University for 12 years, taking night classes while working full-time. He ended his career as Director of Contracts for Boeing’s operation in Huntsville, Alabama, which includes the International Space Station. Her mother was the longtime chief of staff for former Wichita Mayor A.E. Howse.

Widener selected Wichita State as a place to make a philanthropic gift because she believes the education she received provided her with a running start on the future. “No matter what you achieve, no one does it on their own. That’s why it’s important to remember where you came from, reflect on those who helped you and pay it forward to the next generation,” added Widener, who lives in Nashville and Huntsville. “WSU has been the springboard for many people who went on to have successful lives. If you have a dream, Wichita State is a great place to start.”