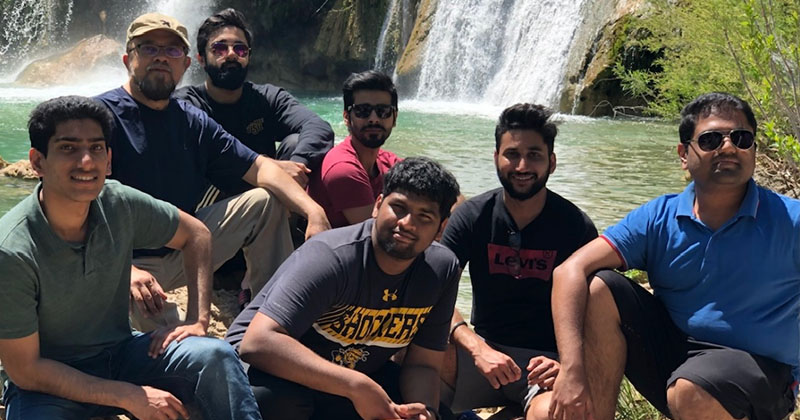 Muhammad Usmani, second from left, helps international students at Wichita State settle into their new home. He’s shown here on a camping trip with students in Oklahoma a few years ago.

Muhammad Usmani is far more than a boss to the graduate assistants who help him meet the technology needs of University Libraries at Wichita State.

He’s also a mentor, a counselor, sometimes a father figure and, ultimately, a friend. So when Usmani reached out to dozens of the GAs he has worked with over the past 25 years to ask for their help, they listened.

Usmani, director of library technologies at WSU, told the former GAs that University Libraries, in collaboration with the WSU Foundation, had launched an appeal called LevelUp the Libraries to raise private funds. He encouraged them to donate, noting their support could enhance the Libraries’ graduate assistantship fund.

So far, 34 of the former students – now working in jobs from coast to coast – have contributed a total of $5,878, with donations still coming in. The amount raised is not as significant as the affection these students have for Usmani, who tries to stay in touch with all of his GAs after they have earned degrees and moved into careers.

“Working with Muhammad and the others was like working with a bunch of friends,” says Syed, who earned a master’s degree in computer networking in 2019. “Without a second thought, I did whatever I could by donating to this cause.”

Another former GA, Mobeen Siddiqui, an IT manager in Dallas, got his master’s degree in computer science from Wichita State in 2003.

“It was an honor to donate, especially when the request came from our mentor and teacher,” says Siddiqui. “Mohammad Usmani is a father figure for me and for many GAs who worked with him. He is one of those unique people who nurtured and guided me whenever I needed it.”

Usmani tries to be as supportive as possible to the GAs he hires, especially those who are international students, because he knows first-hand how difficult it is to be away from home, in a different culture. He was a 17-year-old international student when he came to Wichita State in 1986.

“I come up with ways to help them adjust,” Usmani says. “We have a social hour on Fridays, we cook some food and eat together. I take them out for dinner, for lunch, when they do something good. We celebrate their graduations here at the library.”

Usmani also contacts his network of colleagues around the country to help students get jobs after they graduate. Once they have started careers, he keeps in touch to share important milestones.

“When they get married, they let me know and invite me. When they have children, they inform me. It’s kind of a family that keeps getting bigger and bigger.”

Usmani estimates he has supervised about 150 graduate assistants in his time at University Libraries. He is reaching out to a few at a time to ask for their support for the LevelUp the Libraries appeal, so he expects donations to keep coming in as more hear about it.

“They say they are proud to help, they are honored,” Usmani says. He adds: “I really enjoy working with them. They have wonderful talents and interesting backgrounds. I feel I am blessed to have this opportunity to help them.”

So far, the LevelUp the Library campaign has raised about $22,000. To learn more, contact Amy Tully, WSU Foundation development director, at 316.978.3805 or amy.tully@wichita.edu  Make an online donation at https://foundation.wichita.edu/giving/libraries/.