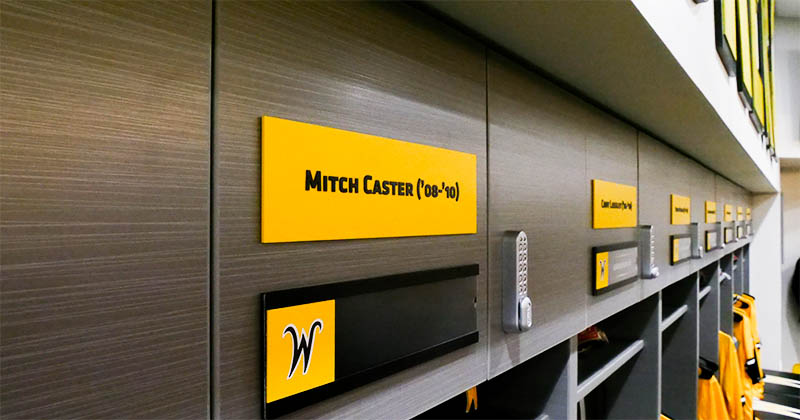 The parents of Mitch Caster, a WSU student-athlete who died in a car accident in 2010, are encouraging donations so that a scholarship in his name can be endowed. Caster’s locker at Eck Stadium remains unused as a tribute to his memory.

Anyone who visits the WSU Baseball team’s facility will recognize there is one locker that remains unused. It belongs to a player who has made a lasting impact on the program.

Mitch Caster, a Wichita native, was tragically killed in a car accident as he drove back to Wichita for his senior season in 2010. But his love for WSU continues through a scholarship named in his honor.

Mitch grew up a WSU fan and, as a top high-school baseball recruit who caught the eye of many college programs, could have attended another school. He even told his mother after accepting a scholarship to WSU, “I just can’t imagine wearing anything but the black and yellow.”

“Mitch was sports 100 percent of the time,” says Susie Caster, Mitch’s mother. “He was hitting off a tee when he was 2 years old – baseball was a passion and an integral part of his life.”

The love for WSU runs in his family. His father, Mike, played golf at Wichita State and his twin sister, Melissa, earned her nursing degree from the university.

Some of his parent’s favorite memories of Mitch on the field include his first start as a college player against KU at Eck Stadium and hitting a home run as a pinch hitter in the super regionals against Florida State, with Major League Baseball Allstar Buster Posey catching behind the plate.

After his death, the Mitch Caster Shocker Baseball Scholarship was established by his parents with the intent of supporting fifth-year seniors who had used their eligibility. A portion of their education would be paid for in Mitch’s name. “We wanted to help keep Mitch’s legacy alive,” says Mike Caster.

The first scholarship dollars raised in 2011 came from a combination of gifts and the sale of t-shirts during a memorial at Eck Stadium, an effort that yielded nearly $7,000. The goal now is to raise enough funds to endow the scholarship so that it will be awarded in perpetuity. The minimum amount required to endow a scholarship is $35,000.

The scholarship is currently $10,000 away from the goal, and one anonymous donor has already committed to matching the first $5,000 donated between now and the end of the year.

There have been 11 recipients of the scholarship so far and contributions large and small will help support WSU student-athletes for many years to come.

“Continuing his legacy through this memorial means so much to us,” Mike Caster says. “We’re all Shockers for life and the ongoing support of the WSU community is incredible.”

If you would like to learn more about supporting the Mitch Caster Shocker Baseball Scholarship, contact Aaron Winter, WSU Foundation director of development, at 316-978-3803 or aaron.winter@wichita.edu.