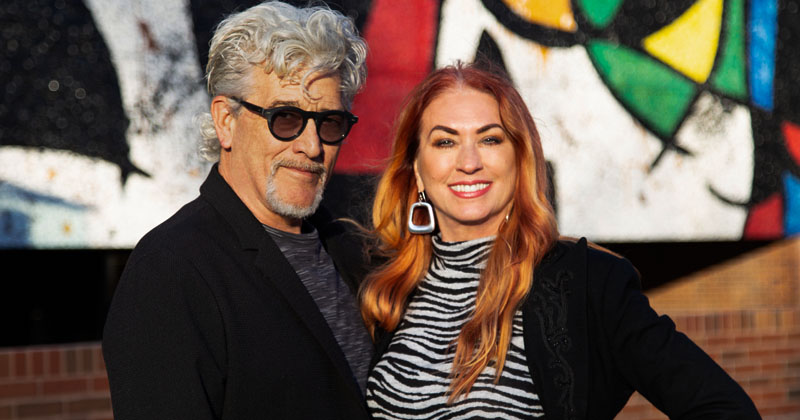 Chris Brunner and Sonia Greteman in front of the Joan Miro mural, “Personnages Oiseaux,” on the facade of the Ulrich Museum of Art.

When Sonia Greteman and Chris Brunner reminisce about their student days at Wichita State, they still marvel at the experiences and opportunities they had.

They also wince a little. More about that later.

The couple attended WSU in the late 1970s and early 1980s, eyewitnesses to history unfolding as Joan Miro’s monumental mural, “Personnages Oiseaux,” was installed on the façade of the Ulrich Museum of Art. They attended lectures given by internationally acclaimed artists like Louise Nevelson and John Cage. And they rubbed elbows with Ulrich Museum Founder Martin Bush as he developed WSU’s renowned Outdoor Sculpture Collection.

“It wasn’t until many years later that I realized what a magical time we experienced at Wichita State,” says Greteman, a 1982 graduate who now owns Greteman Group, a successful creative agency in Wichita. “It just left an indelible impression on me as a young designer.”

Now, Greteman and Brunner, who earned a master’s degree in 1979, want to show their gratitude. They have pledged a significant estate gift and designated that it be used to renovate and update Henrion Hall and McKnight Art Center, two facilities they spent countless hours in as students.

That’s where the wincing is heard, as Brunner describes the frustration and disappointment he felt as a student – and still feels today – with the condition of Henrion Hall.

“It’s hard to describe without sounding too negative,” says Brunner, a highly regarded sculptor. “Our work space was wedged underneath bleachers of the old football field at Henrion. And things haven’t improved that much 40 years later.”

McKnight Art Center, Greteman says, was a fairly new facility when she studied there, but today, “it’s just kind of sad. It needs somebody to care about it.”

Their estate gift is all about helping to ensure that future art students have a learning environment that inspires them.

“I always thought that if I ever got to a place where I can help improve someone’s experience, I wanted to do that,” Brunner says. Adds Greteman: “I want young graphic designers to have a chance at the fabulous career that I’ve had. WSU was my entry point into the world and without it I couldn’t have achieved what I have.”

In the past decade or so, the two have reconnected with Wichita State in various ways. They served on the volunteer committee that helped raise funds for the restoration of the Miro mural. They are active supporters of the Ulrich Museum. Brunner is a big fan of the men’s basketball program. Greteman serves on the WSU Foundation’s National Advisory Committee.

“The NAC meetings are among my favorite days of the year,” she says. “They help me connect back to the university, understand the priorities and provide a snapshot into what’s going on. I come away inspired by students’ heartfelt stories and passion to change the world.”

The couple has a message for others whose experience at Wichita State shaped their destinies.

“It you have been thinking about leaving a gift, do it. Get it on paper now,” Greteman says. “If anything happens to you, the causes you believe in are protected and given new life. If COVID has taught us anything in the past two years, it’s that nothing is forever.” Says Brunner: “We care about this university. Our gift allows us to be a part of what happens to it in the future.”

To learn more about how you can pledge an estate gift, contact Mike Lamb, WSU Foundation vice president, at 316.978.3804 or mike.lamb@wichita.edu.