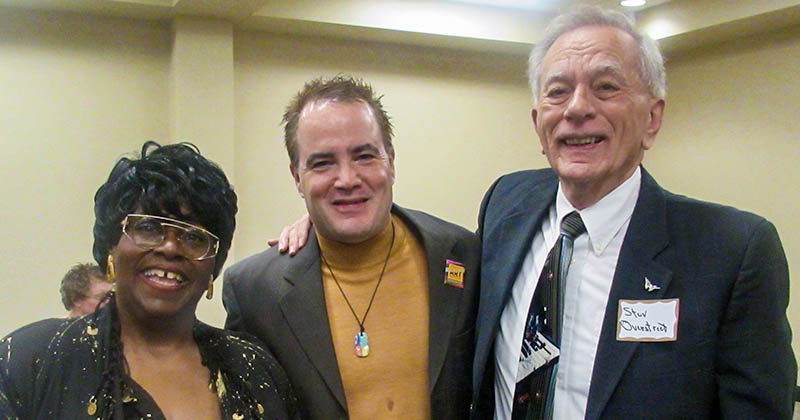 Stev Overstreet, right, and James Sprowl were avid supporters of the fine arts in Wichita. They’re shown here with the late Karla Burns, a well-known performer and WSU alumna.

Stev Overstreet has been supporting Wichita State students through scholarship assistance since 1996. So when his partner of 24 years passed away recently, Overstreet turned a sorrowful situation into one of hope and meaning by endowing a need-based scholarship in his name.

“Almost all of my support to the university has been in the form of scholarships, so it made sense to me to remember James with an endowed scholarship that should be there forever,” says Overstreet, who earned bachelor’s and master’s degrees in business administration from Wichita State in the late 1960s.

The James Sprowl Memorial Scholarship in Criminal Justice seeks to support non-traditional students in recognition of Sprowl as a student who worked full time while pursuing a criminal justice degree for nine years, mostly at night.

Overstreet feels a strong allegiance to Wichita State, crediting his education here with helping him be successful in both his life and his career. Recently retired, he worked for 42 years as a Real Estate Manager for Boeing and then for Spirit AeroSystems. He was the first in his family to earn a college degree.

While a student at WSU, he was an active member of the professional business fraternity, Alpha Kappa Psi. He also joined ROTC and was commissioned as an officer in the Army upon graduation. Despite those activities, Overstreet says he spent most of his free time studying and didn’t have the full college experience many other students had.

“I’ve taken the opportunity to enjoy ‘campus life’ much more as an adult, mostly in areas of the fine arts,” Overstreet says. “During the school year I may be at meetings, functions, events or performances on campus multiple times in a week.”

He has established the Overstreet School of Business Endowed Scholarship and also has pledged a significant gift from his estate, which will supplement that scholarship while also funding several College of Fine Arts scholarships to be created.

“I am very much a believer in providing need-based scholarships to allow students from families with limited resources to earn degrees with minimum burden of work or debt,” Overstreet says.

Besides scholarship support, Overstreet also has contributed for many years to a variety of fine arts programs, including Music Associates, Performing Arts Angels, Art and Design Advocates, Voice Study Abroad and the Ulrich Museum of Art. He also donates regularly to support KMUW public radio.

The creation of need-based scholarships is a top priority for the WSU Foundation. If you would like to learn more about this area of support, contact Darin Kater at 316.978.3887 or darin.kater@wichita.edu.