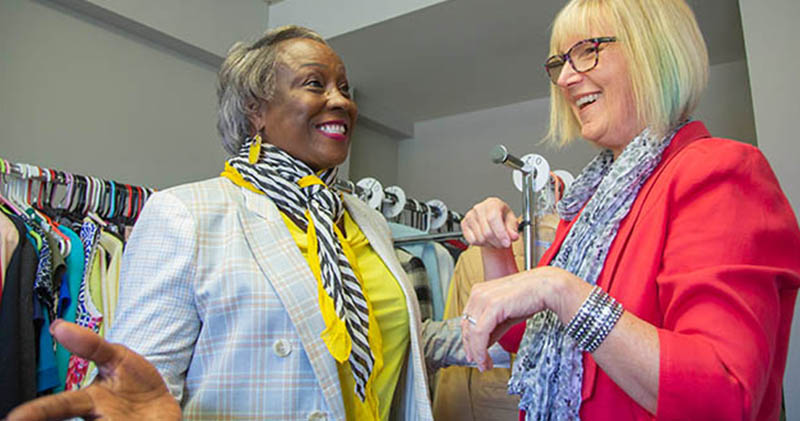 Junetta Everett and Susayn Brandes team up with a special gift

Junetta Everett and Susayn Brandes can recall the early days in their careers when neither had – nor could afford – the kind of attire their jobs demanded.

“Even during the interview process, I didn’t have access to professional clothes,” Brandes says.

“Going into corporate America, I didn’t have the wardrobe to fit into that world,” says Everett. “Had I been able to go someplace like the Career Closet, I would have been able to dress better, look better, feel better and do better.”

That’s why the two WSU graduates are jointly contributing $100,000 in support of Career Closet, a service giving WSU students access to free clothing like suits, jackets, skirts, slacks and accessories such as ties and scarves. Most of the items have been donated and are gently worn, second-hand pieces.

Career Closet is one of 16 student services that will be moved to one central location on campus to offer Shockers greater convenience and accessibility to those crucial services. That location will be Clinton Hall, now home to the W. Frank Barton School of Business. When the Barton School moves to its new building, Wayne and Kay Woolsey Hall, Clinton Hall will be renovated and repurposed as the new Shocker Success Center, projected to open in 2023.

When Everett and Brandes first learned about the project and the need for private support during a meeting of the WSU Foundation board of directors, the two members looked at each other and said, “We should do this.”

“I was always told to dress for the position you want, the career you want,” says Brandes, president of Great Plains Ventures and a 1981 WSU graduate. “So if we can help students look professional for their interviews or internships, we can help take away a little bit of the nervousness everyone feels in those times.”

Responds Everett, a 1979 WSU graduate and recently retired vice president at Delta Dental of Kansas: “I can remember that feeling. I would like to help someone else not have to go through that.”

The Shocker Success Center project is projected to cost $16.2 million, a portion of which will be privately funded. Naming opportunities are available throughout the four-level building to those contributing to the project.

When students visit the Career Closet in the new Shocker Success Center, they will see the names of two successful alumni who cared enough about their futures to invest in them philanthropically.

“We both got our degrees from Wichita State, and that has helped put us in a position to make this gift,” Brandes says.

“It will be great to help future Shockers become the best versions of themselves,” says Everett.

Maryalice Birk gives to the project in memory of her partner, Denise Meredith

Before she passed away from a sudden ailment in 2019, Denise Meredith had already endowed two scholarships at Wichita State and made it known she intended to continue supporting her alma mater.

“She got a real thrill out of being able to help others, especially when she saw students putting in the work, graduating and going on to their own careers,” says Denise’s wife, Maryalice Birk.

That’s why Birk, in addition to increasing the two scholarships already endowed by Meredith, decided also to support students through the Shocker Success Center. Their gift of $75,000 will be recognized with a naming opportunity for the space housing Adult Learning Services on the new facility’s top level.

After serving several years as a U.S. Marine, Meredith returned to her hometown of Wichita to earn a master’s degree in business administration from Wichita State. She went on to a long career in aviation, first with Boeing and then Raytheon.

“She was always a mentor to women at work and sought ways to promote women and help them get ahead,” Birk says. “She made a list of things she wanted to do before she died, and so much of it was about taking care of others.”

Barbara McCune has been supporting Wichita State for more than four decades, most of that period with her late husband, John, who died in 2019. Their biggest passion was for the welfare of students, particularly those with financial limitations. The McCunes established two scholarships and also stepped up with a generous gift to support students when Covid struck in 2020.

So McCune’s gift of $100,000 to the Shocker Success Center project aligns perfectly with her desire to give students resources that will help them succeed. To honor the couple, the TRIO Student Support Services office in the new facility will bear the names of Barbara and John McCune.

“It took John seven years to graduate from Wichita State because he was also working,” says Barbara McCune. “We always knew that college can be really hard for some students, and they need all the help they can get.”

Of the McCunes’ four children, three graduated from Wichita State and went on to successful careers. “Wichita State has been important to us for so many years,” Barbara says. “It’s something we’ve always wanted to help in whatever way we can.”

To learn more about how you can support the new Shocker Success Center, contact Corey Saleh at 316.978.4483 or corey.saleh@wichita.edu.