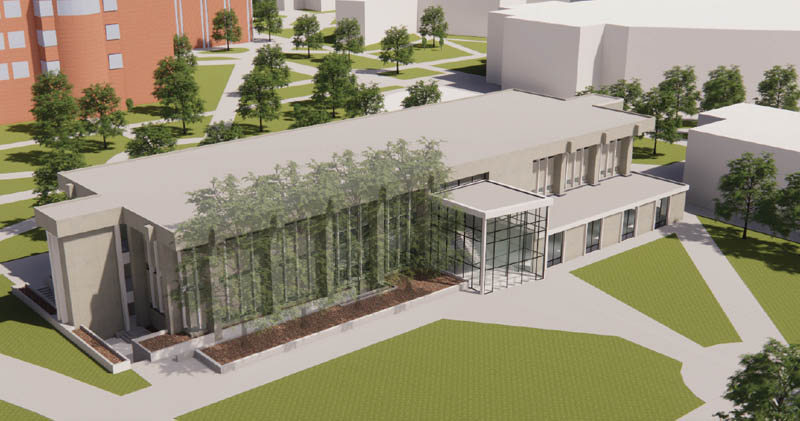 Each year, thousands of Wichita State students make multiple visits to campus buildings that house an assortment of services intended to help them succeed in college.

Students like Nataleigh Swonger, whose dyslexia impedes her ability to take exams with a classroom of other learners. WSU Testing Services makes it possible for students like her to take tests in an environment optimal for them.

There’s Alexander Pham, who turned to OneStop services to iron out the complications of changing his major from art to business. “I honestly didn’t know what was going to happen but OneStop made the transition seamless,” Pham says.

Wichita State prides itself on the quality of student services it offers, says Teri Hall, vice president for student affairs. But a major drawback has been where these services are currently located – in buildings scattered all around campus.

“There’s really no rhyme or reason to where some of them are housed,” Hall says. “We believe many of them would get more traffic and ultimately be more effective in helping students graduate if they were placed in one central location, under one roof.”

To accomplish that, an initiative has been launched to transform Clinton Hall into a new Shocker Success Center, where 15 student services will be relocated from the 10 buildings where they are now housed. Clinton Hall is now home to the W. Frank Barton School of Business, which will move to the new Woolsey Hall in 2022.

“What the Shocker Success Center shows our students is how much their success matters to this university,” Hall says. “Students can walk into one building and get almost any service they could possibly want.”

Clinton Hall is especially suitable for the new facility because of its prime location, right between the Rhatigan Student Center and Ablah Library, two popular student destinations.

“The accessibility – in the heart of campus where a corridor of activity already exists – is a key factor that will be important to our students,” Hall says.

The project should result in cost efficiencies by consolidating spaces and staff, she said, as well as create opportunities for greater collaboration and innovation.

To learn more about the Shocker Success Center and how you can support the project, contact Corey Saleh with the WSU Foundation at 316.978.4483 or corey.saleh@wichita.edu.

A POWERFUL INVESTMENT IN STUDENTS AND THEIR FUTURES

It’s estimated the cost of renovating Clinton Hall to become the new Shocker Success Center will be $16.2 million, with a portion raised through private support.

“We hope to show prospective donors how important this project is to retain our students and move them along a path to graduation,” said Elizabeth King, WSU Foundation President and CEO.

Those supporting the project will be recognized with naming opportunities throughout the four-level building. “Students will be in and out of this building a lot, with many occasions to see and appreciate the contributions people have made,” said Teri Hall, vice president for student affairs.

Please scroll down to read about a WSU alumnus who has made a significant contribution to this project.

A CAMPUS THAT CARES

Student services now scattered across campus – in buildings represented by yellow circles – will move to the centrally located Clinton Hall (in red).

Wichita State is where Stanley Choi got his first paycheck in the United States, about $150 for tutoring students in Econ 101. He has never forgotten that, nor the many ways in which WSU embraced him as an international student and made him feel welcome.

“Those three years at Wichita State were among the happiest periods of my life,” says Choi, a Hong Kong businessman and investor who graduated in 1995 with a bachelor’s degree in finance. “WSU and the Wichita community accepted me as an outsider.”

Feelings of gratitude and appreciation are what prompted Choi to pledge a gift of $250,000 to support the Shocker Success Center project. His investment in his alma mater will be recognized with a naming opportunity for the OneStop office in the facility when it opens in 2023.

Choi also credits his education at Wichita State with assisting him on a path to great success. He is chairman of Head and Shoulders Financial Group, an investment holding company.

“Wichita State provided the fundamental courses that allowed me to explore more about financial markets and formed the foundation of the career I have today,” Choi says.

Married with two grown children, Choi has a hobby that allows him to take advantage of his keen mind for numbers. He’s a professional poker player who competes in tournaments around the world and currently is the top money winner in China.

He says he would recommend Wichita State without hesitation to anyone interested in a good education. “I would tell new students, ‘You are not alone. You can make it wherever you want.”