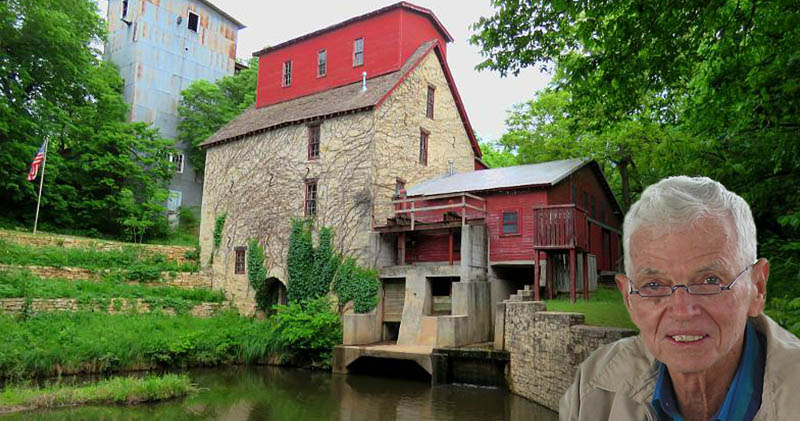 Wallace Champeny was the longtime owner and operator of the Old Oxford Mill, which his family owned for more than 60 years.

Those who counted Wallace Champeny as a friend knew well the things he valued most in life. Being a good caretaker of the family-owned Old Oxford Mill was one. His devotion to the hobby of birdwatching was another. And his love for his parents, especially his mother, was a third.

Mr. Champeny knew that his mother, Gladys Wallace Champeny, was a proud graduate in 1924 of Fairmount College – the school that years later would become Wichita State University. So when he prepared his estate plans, he made sure to honor his mother by making a gift to WSU’s Fairmount College of Liberal Arts and Sciences. He designated that the gift, valued at about $370,000, be used as the Fairmount College dean saw fit, a welcome stipulation that gives Dean Andrew Hippisley enormous flexibility.

“Fairmount College of Liberal Arts and Sciences and Wichita State owe a great debt of gratitude to Mr. Champeny,” Hippisley said. “His generous gift will allow us to undertake a number of initiatives to benefit our students. Although specifics are still being worked out, one area we know we want to enhance is our study abroad program, which provides life-changing experiences, especially for our first-generation students.”

Mr. Champeny died in 2020 at the age of 94. A graduate of Kansas State University, he spent most of his adult life helping his parents operate the Old Oxford Mill, built in 1874 and placed on the National Historical Register in 1982. It operated as a restaurant from 1990 to 2006, and is still functional.

An only child, Mr. Champeny never married. He was an avid birdwatcher who took many trips with the Audubon Society, said Bob Gress, president of the Wichita Audubon Society.

“Everybody called him Wally, and everybody who knew him liked him,” Gress said. “He could talk faster than anyone I ever met. You had to be on your toes with Wally. He had a cadre of friends who were devoted to him, as he was to them.”

The Wichita Audubon Society was among several organizations included in Mr. Champeny’s estate plans, Gress said. “He lived very frugally, but left behind a generous and wonderful legacy.”

One touching aspect of the gift is that even though Gladys Champeny graduated from Fairmount College nearly 100 years ago, the impact it made on her is still being felt today, said Mike Lamb, WSU Foundation vice president.

“It’s very meaningful to know that today’s Shockers will benefit because Mrs. Champeny thought so highly of her own student days here,” Lamb said.

If you would like to learn more about including Wichita State in your estate plans, contact Mike Lamb at 316.978.3804 or mike.lamb@wichita.edu.