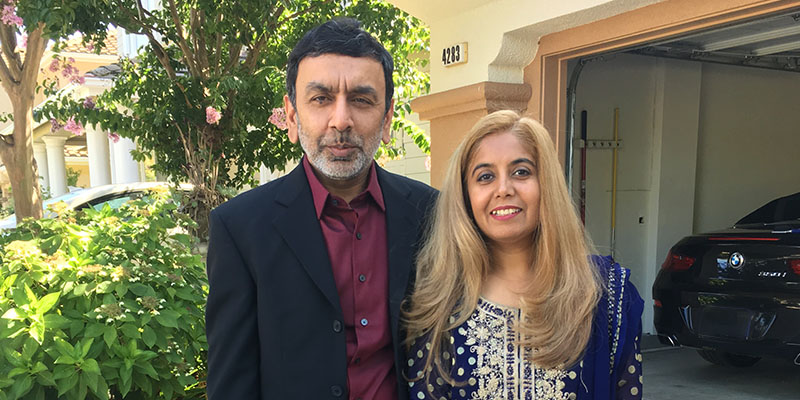 When Nighat Ara was 16 years old, she boarded a plane in Pakistan by herself to fly 7,000 miles around the world to Wichita State University and begin her collegiate career. What started as a lonely journey quickly turned into an unforgettable community and is what inspired Ara and her husband, Mosaddaq Turabi, to establish a scholarship at WSU for other international students following in their footsteps.

“We have so many good memories from WSU,” said Ara. “It’s the reason we have the lives we have. Without that education and support, we wouldn’t be here.”

When she first arrived in Wichita, Ara was welcomed by the entire Pakistani student community, who helped arrange a place to live, roommates, food and other items needed to get settled in. She said the support of that community and the WSU Office of International Education helped significantly as she and Turabi learned the culture.

Ara began studying electrical engineering and secured two jobs on campus to help support herself through college. She easily remembers the long weeks that came with it, spending her days working at the WSU library and the student center candy counter and her nights sitting through physics classes.

“It could be so hard to focus through those classes. I remember struggling to keep my eyes open and pay attention after working all day,” said Ara. “That’s why we’ve created this scholarship. Everyone needs a little help sometimes, and our hope is that this takes away some of the stress of going to school and gives students a chance to truly excel.”

For the love of engineering

Despite the challenging nature of the classes, Ara has fond memories of her time studying because that’s how she and Turabi first met. Both received their bachelor’s and master’s from WSU, and today work in network engineering in California. It wasn’t until after they were married the two learned they had come from Pakistan on the exact same flight, but it was the electrical engineering program at WSU that brought them together.

It’s part of the reason their scholarship will be designated for need-based aid with a preference for electrical engineering students from Pakistan. Named in honor of Ara’s father, the Iftekhar Scholarship/Fellowship is also supported by Ara’s siblings, who attended Wichita State as well.

“It makes sense to name it after him and,” said Ara. “He was so passionate about education and believed that anyone could achieve their dreams with the right help. Even outside of his role in education, students would come to him for advice about their careers and he always offered an infectiously positive outlook. We’re so happy we have the opportunity to extend his legacy in this way.”