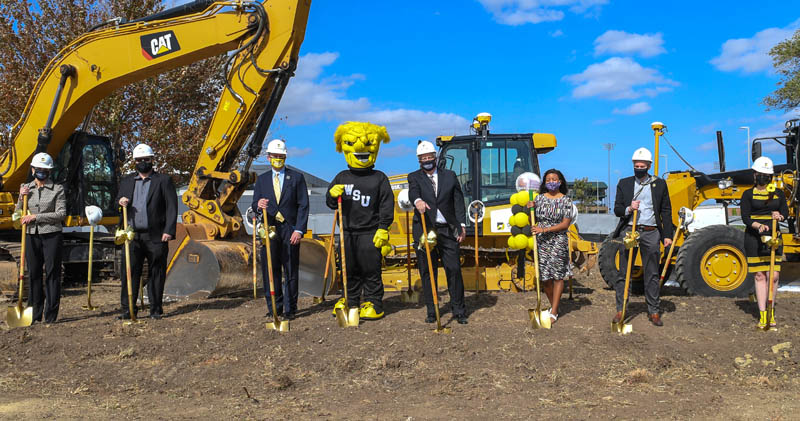 Alumni, donors and officials from Wichita State University gathered Thursday (Oct. 22) for a groundbreaking ceremony for Wayne and Kay Woolsey Hall, the new home for the W. Frank Barton School of Business.

In a statement, Barton School Dean Larisa Genin told students the facility will be a place “where you will explore your full potential and ambitions.”

“Whether it’s launching a career, starting your own business or working to solve problems in our world, Woolsey Hall will be your lab, your sandbox, your incubator, your oyster to create amazing pearls. I can’t wait to see what you accomplish,” Genin said.

Woolsey Hall, named for the Wichita couple who provided the lead gift to the WSU Foundation’s fundraising campaign, will be located on the Innovation Campus. When completed in mid-2022, it will replace Clinton Hall, which has been home to Wichita State’s business school since 1970.

Elizabeth King, WSU Foundation president and CEO, said the day was cause for celebration after seven years of fundraising and, before that, years of planning for a new business school facility. The Foundation and its partners have raised about $31.5 million, with Wichita State providing the remaining funds for the project.

“I’m deeply grateful to all who recognized the value that a first-class business school facility will have for our students, our faculty and our community,” King said.

Among those speaking at the groundbreaking ceremony was Marc Woolsey, representing his parents, Wayne and Kay Woolsey, who donated $10 million to the fundraising campaign. Wayne Woolsey, who founded the Woolsey Companies, was unable to attend the event. Kay Woolsey died in 2018.

“It was my father’s entrepreneurial mindset – a belief in taking risks and making new discoveries – that was one of the reasons my parents made the gift they did,” said Marc Woolsey, a WSU graduate. “My father said he hoped their financial support would help develop future entrepreneurs and business leaders for our community.”

WSU Interim President Rick Muma said the new facility signifies Wichita State’s commitment to excellence and its willingness to invest in endeavors it believes will bring distinction to the university.

“I’m excited for the generations of students who will benefit from this dynamic facility, for the faculty and staff who will be inspired and invigorated by it and for the community connections and partnerships that will flourish inside it,” Muma said. Woolsey Hall will be a three-level, LEED-certified building. It was designed by the architectural team of GastingerWalker of Kansas City and Gensler Chicago. Dondlinger Construction of Wichita won the competitive bid to build the facility.